What do we mean if we say that the novel we have on our bedside table, a short story we recently read or even a children’s tale that we still remember is a “powerful” text? 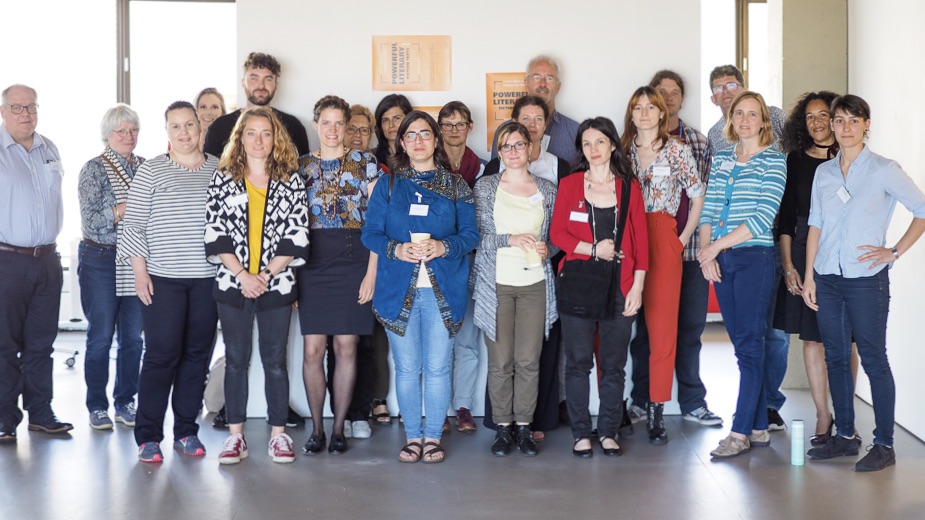 At the “Powerful Literary Fiction Texts” conference– first of an annual series organized by Mariane Utudji (Université Sorbonne Nouvelle), R. L. Victoria Pöhls (Max-Planck-Institute for Empirical Aesthetics), and Craig Jordan-Baker (Brighton University) – 25 researchers from different fields shared their answer to this and related questions at the University of Brighton.

The event sought to promote the exploration of powerful literary fiction through an approach that combines reading aloud, close reading and a study of the text’s potential effects on readers. Attendees brought short passages of their choice to read aloud to the audience – the incipit of a novels, part of a short story, engaging dialogue from science fiction, an excerpt from a drama – before explaining why and how this text achieves a powerful impression on the reader.

Fiction, thus the hypothesis, can change the way we feel, but also the way we look at the world around us. Often, both the way we emotionally react to a text and the insights gained are deeply connected: Only because we experienced sympathy towards a character, we started to look at the world from his or her shoes; only because the mastery of style had such an immediate impact on us, we remember the experience and continue to think about issues raised in the work of Fiction long after we have closed the book.

The three organisers opened the conference by highlighting the main purposes of the conference. Mariane Utudji insisted on the performance aspect of the advocated approach and on the power of the human voice, the latter being a true “vehicle of energy and emotion” and “the best means at our disposal to enhance the power a text is endowed with.” Everyone was thus invited to “put the text back in the centre of the picture”, to “give it all the space it needs” and to “revel in its physicality, so it can be experienced by all as ‘living’ material embodied through human voice.” She also highlighted the interdependence between a powerful literary text and the language it is made of, namely words, language, linguistic arrangements, stylistic devices, which therefore need to be carefully scrutinized.”.

R. L. Victoria Pöhls then drew everyone’s attention to the fact that “Texts are unable to act directly on the world, they can’t be powerful in themselves.” Thus, the spotlight should be shared between the text’s stylistic features and the readers’reactions to these texts. She advanced the stance that literary studies which take texts seriously as aesthetical and cultural objects, make claims above individual taste or impression. Literary scholars’ work is therefore “more than an entry to a personal reading diary” – even when they do not explicitly work empirically. She hereby invited participants to take on an empirical viewpoint; a viewpoint concerned with, if not yet verifiable by, observation or experience of real readers, taking into account that these readers might be either like ourselves or different: “Looked at that way, all presentations we will hear in the following two-and-a-half days are advancing a hypothesis of the kind of power this text has, and of the features responsible for this effect. But as it is never determined in the way it is read, experienced or understood – we can then also ask ourselves where the ambiguity lies that allows readers to react differently to the same text, and speculate about the conditions under which this text would appear less powerful to some.”

Finally, Craig Jordan-Baker, being the Brightonian organiser, introduced the various festivities and venues of the event and provided some organisational information.

Following this, the first keynote presentation was delivered by Michael Toolan (University of Birmingham). It explored “The intensifying power or repetition and return” in McGahern’s “Swallows”, a short story which is prone to foster reader-immersion.

The day was closed by Reception Drinks at Junkyard Dogs, giving participants – some having travelled from as far as South Africa or Finland – the chance to get to know one another from the very beginning of the conference.

We started our exploration into the question “What is it that makes literature powerful” by considering features that, in prose texts at least, are often seen as background features and are therefore sometimes overlooked – even though they are crucial for the effect the text has on us. Alice Labourg (University of Rennes II) discussed the incipit of The Mysteries of Udolphoand its pictorial descriptions, which she hypothesized to evoke lasting mental imagery in the reader or even make them feel as if they were in a “picture gallery”. Another background feature, rhythm, was highlighted as crucial for reader’s representation of a text in Maryvonne Boisseau’s talk (University of Strasbourg), who connected rhythm with reader’s genre expectations.

For the rest of the day, the presentations were centered around a broad range of  “Emotions” that might be elicited in readers when confronted with texts and make them be experienced as ‘powerful’.

We started lightly, as Constance Robert-Murail’s presentation (ENS of Lyon) dealt with David Mitchell’s Black Swan Greenthat puts on a partly humorous tone, while dealing with serious subjects, that helps readers to identify with a struggling teenager. But can there be affective engagement and emotion transfer in the face of nobodybeing there in a text? Mahlu Mertens (Ghent University) discussed the (overcoming of) sadness in literature dealing with anthropocene. Strong feelings of sadness and elegaic moods created by The Great Gatsby were also discussed in detail by Christine Chollier (University of Reims).

The next talks showed that the same stylistic feature – repetition – can give rise to very different feelings in readers: Elina Valovirta (University of Turku) presented a text from the genre of ‘adult romance’, written to arouse and titillate readers and ease their reading experience by repetition. Sixta Quassdorf (University of St. Gallen), who used David Foster Wallace’s The Pale Kingas example, indicated that here this stylistic device asks for a lot of investment by the reader to find something worthwhile in the prima facie monotonous structure of the text, and, if that investment wasn’t made, could produce boredom.The topic of challenge for readers when facing difficult style was picked up by Giulia Grisot (University of Nottingham): Her results of an eye-tracking study suggested that what is considered as the same style by literary theory might have different effects on different readers.

From difficulty the talks were moving on to more unnerving emotional experiences. While Fredric Jameson once said about postmodernism that “there is very little in either the form or the content of contemporary art that contemporary society finds intolerable and scandalous”, Ciarán Kavanagh (University College Cork) showed with an extract from J.G. Ballard’s Crash that shock and disgust can still be elicited in readers. Peter Wenzel’s reader response study (RWTH Aachen University) on the other hand revealed that time can change the effect a piece of literature has on the readership: He discussed possible reasons why Matthew Lewis’s The Monk was thought as scandalous at the time of publication, but did not elicit feelings of horror in modern readers, but was still understood as a text aiming to do so.

On the third and last day, all presentations focused on texts that elicit powerful feeling mainly because of the characters they stage and the relationship they establish between reader and character. The following question was raised: How and why does the reader identify with certain characters? The seven talks offered diverse and complementary approaches and answers.

The second keynote speaker, Nigel McLoughling (University of Gloucestershire) analysed the sense of liminality that emerges from several passages taken from the most famous Heart of Darkness, using a cognitive stylistic framework drawn from Text World Theory.

Kimberley Pager’s paper (University of Huddersfield), entitled “Introducing Jane: the Power of the Incipit” showed how the situation and personality of a most famous protagonist, Jane Eyre, are implicitly featured in the incipit of the eponymous novel. Maria-Angeles Martinez’s talk (Complutense University Madrid), entitled “The language of engagement and the projection of storyworld possible selves in Roberto Bolaño’s The Savage Detectives”, used the notion of Storyworld Possible Selves to try and find out why a reader is more likely to blend with one character rather than another one. Carolina Fernandez-Quintanilla’s presentation (Lancaster University), entitled “Empathising with a torturer?”, dealt with empathetic and non-empathetic engagement with characters through an approach that combines analysis and empirical reader-response experiment. Elise Nykänen and Aino Koivisto’s paper (University of Helsinki), “Fictional Dialogue and the Emotional Effects of Prose Fiction” invertigated how fictional dialogue may stage emotion between characters and thus trigger affective responses in readers while also telling something crucial about the real world. Ailise Bulfin’s talk (University College Dublin), entitled “Representing abuse and traumatic memory in Deirdre Sullivan’s Needlework”, also analysed characters that trigger affective responses in readers in such a way as to help them better understand some real people’s predicaments and behaviours. Juliette Misset’s paper (University of Strasbourg), “The Didactic Power of Sentimental Aesthetics: Student Responses to an Excerpt from Mary Wollstonecraft’s Maria, or The Wrongs of Woman(1798)”, showed how radical ideas can be expressed in a novel belonging to the sentimental genre thanks to a bond between reader and character and across time. Finally, Tahir Wood’s presentation (University of the Western Cape), “The nature of the agonistic in a pragmatics of fiction” questioned the nature of the bond between reader and character, by highlighting the triadic nature of fiction texts: the relationship between character, reader and author.

The Scientific Advisory Board, composed of sixteen researchers in the fields of linguistics, stylistics and literature from France, Germany, the UK, the Netherlands and Switzerland.

Sarah Brendecke (Max-Planck-Institute for Empirical Aesthetics, Graphics) for the design of the conference logo and materials.

Staff and Owners of Junkyard Dog, Bom Banes, and Al Duomo for preparing wonderful dinners and lunches for us.

Phil Wood from The Brass Monkey for delicious organic ice-cream in one of our coffee breaks.

All participants for great presentations and lively discussions!

The weather for being (sunny) as it was.